Britain’s transport systems are broken. Commuting by rail is expensive, unreliable and unpleasant, and away from the major commuter routes, buses, trams and trains are so infrequent and expensive that cars are essentially made a necessity. 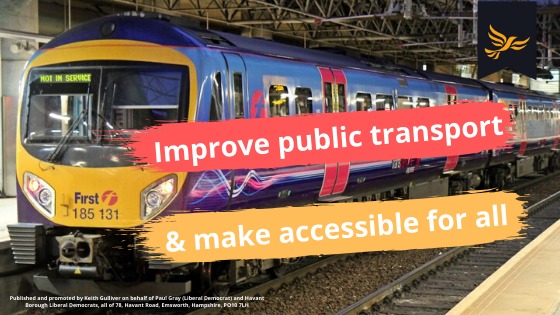 This in turn has made air pollution – mostly caused by cars – one of the biggest causes of preventable illness in the UK, causing at least 40,000 premature deaths a year and costing the NHS £15 billion.

And surface transport is now the largest source of greenhouse gas emissions in the UK, with almost no progress in reducing them since 1990. The UK’s share of international aviation and shipping emissions has risen by almost 80 per cent since 1990.

Paul believes passionately that local transport investment, particularly into green technologies, is essential for the future. Imagine our area with clean, cheap, frequent public transport. Imagine being able to hop on a green bus or a ferry or your bike, knowing there are safe, well maintained cycle highways. Imagine driving your car and NOT getting stuck in congestion. Doesn’t that sound better?

Together these steps will tackle the clean air crisis, meet the challenge of climate change, improve people’s health, stimulate local and regional prosperity and develop British zero-carbon industries, with benefits for jobs, growth and exports.