With local elections coming up on May 6th. A number of our Liberal Democrat candidates standing for both county and borough council elections are joining in and signing the ABCD climate action pledge.

They are agreeing, if elected, to press their council to: 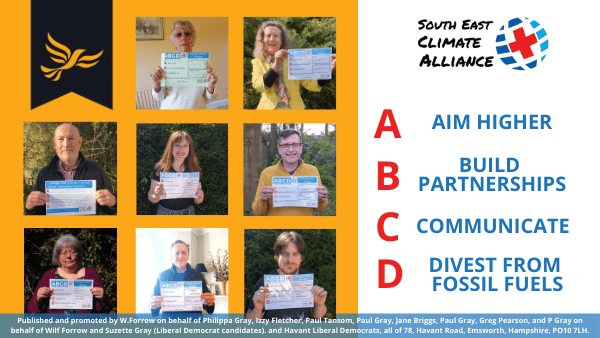 What is The ABCD Pledge?

They are currently concentrating on two main areas:

Why do we need to support this?

Havant Borough Council is the only council in Hampshire to not have declared a climate emergency. We need to pile on the pressure to change this. Our Liberal Democrat candidates want to change this but they can only do this if you vote for them to be your local councillor.

Our candidates have said so far about supporting The ABCD Pledge 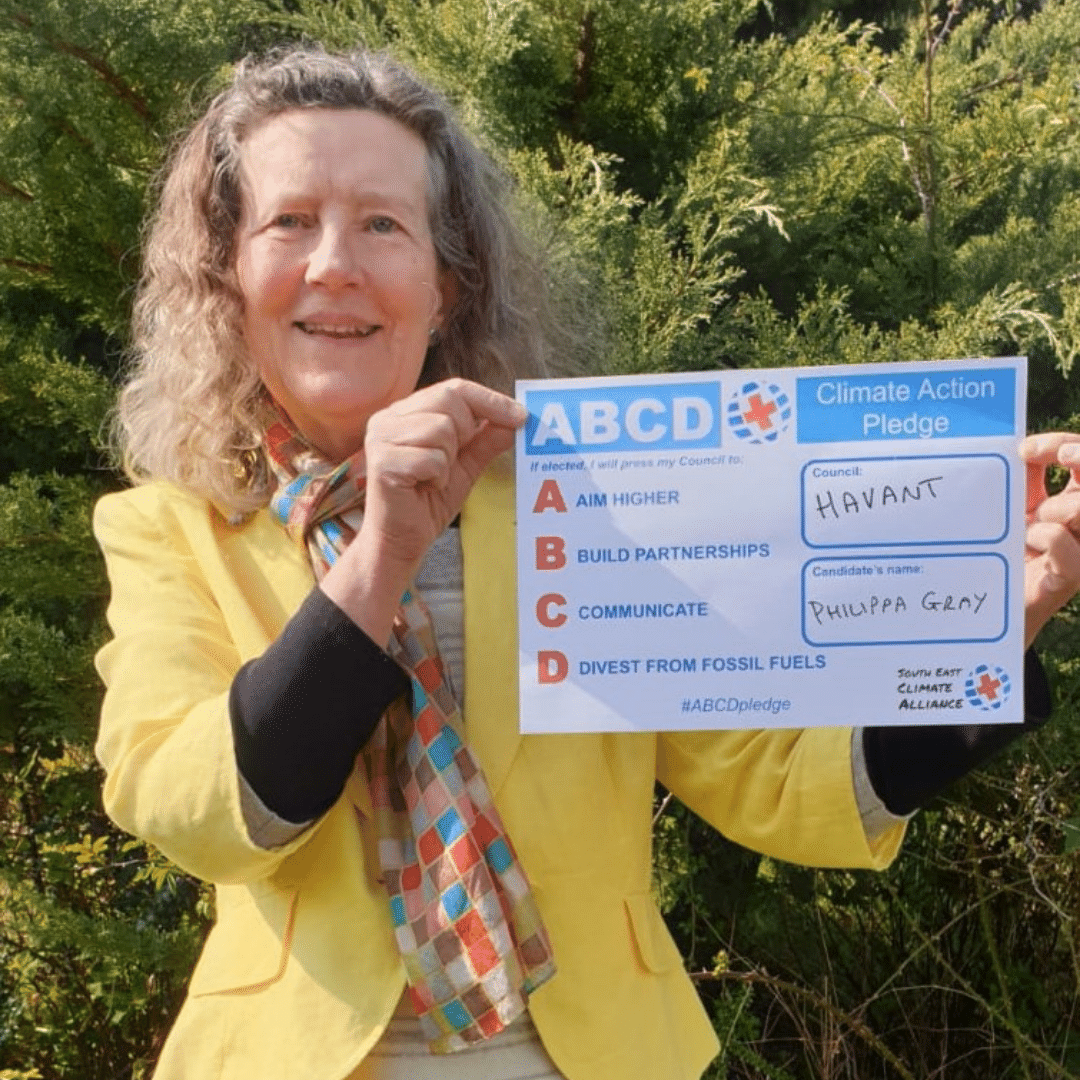 I'm the Lib Dem candidate for Bedhampton (Havant BC) and for North West Havant (Hants CC). I have signed the ABCD pledge and would love the chance to campaign for it as a councillor.

As a voter, you need to understand that our present voting system reduces most elections to a two-horse race, so in Bedhampton and North West Havant, your realistic choice is between me, a committed environmentalist with a strong track record of practical action or a Tory who has been at the heart of the unambitious, low-achieving Conservative team who have run Havant since 2002.

So please remember, vote Green, get Tory. If you want action for the environment then vote Lib Dem, vote for me. I have a strong record of community building and practical green action in Havant (volunteering at Bedhampton Community Centre, setting up Repair Cafe and helping organise Dr Bike).

A lot of this was done in partnership with Green Party members, and I pledge to continue working with them to build a better, greener environment but until we have a voting system that better reflects the wishes of the electorate if you want a councillor who is committed to real action to fight climate change you need to vote Lib Dem.

Not only have I worked hard for our community but I am an experienced campaigner for the Lib Dems and with other parties for Make Votes Matter. I have a strong record of coming second to the Tories so please, don't split the vote and let the Tories in.

Find out more about Philippa here. 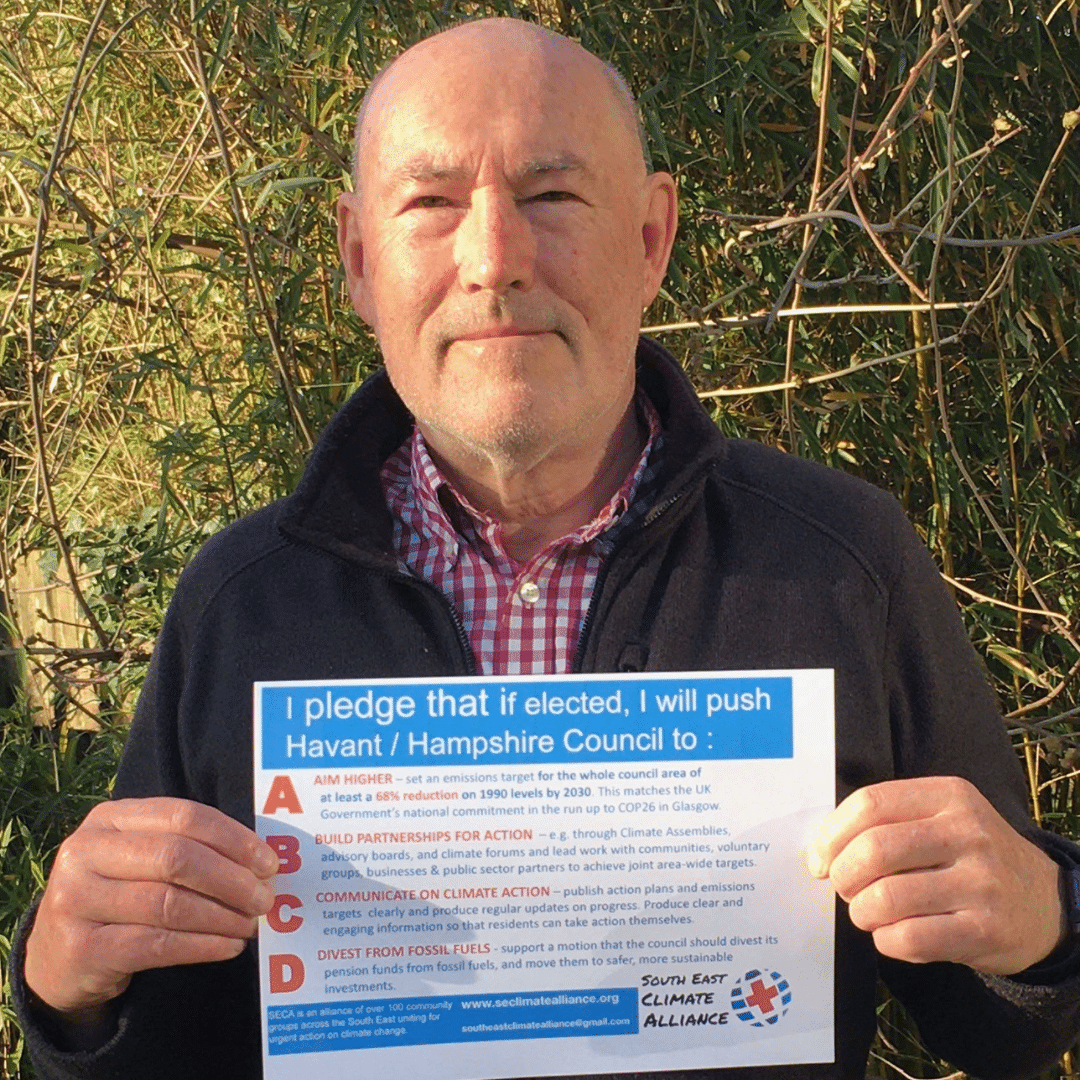 I'm the Lib Dem candidate for Hayling East. I'm a Green at heart, but under our 'First-Past-The-Post' system, the Green Party can't win in Havant.
But Lib Dems can, as they have in Portsmouth, Chichester, Eastleigh, and Havant in the past. Lib Dems are our best hope to turn Havant Green.

I’m passionate about climate change, greener travel, making cycling an everyday way of getting around, active neighbourhoods and biodiversity. I’m a core campaigner for Cycle Hayling, Cycle Havant, and because Havant’s transport is controlled by Hampshire County Council, we’re starting Cycle Hampshire and Green Travel Hampshire.
Our harbours are under threat, from pollution and from sea-level rise, so I’m a member of Havant Climate Alliance, Friends of the Earth, the Hayling Island Environment Forum, and a stakeholder on the Hayling Island Coastal Strategy. I fully support the Hayling Sewage Watch initiatives.

Find out more about Wilf here. 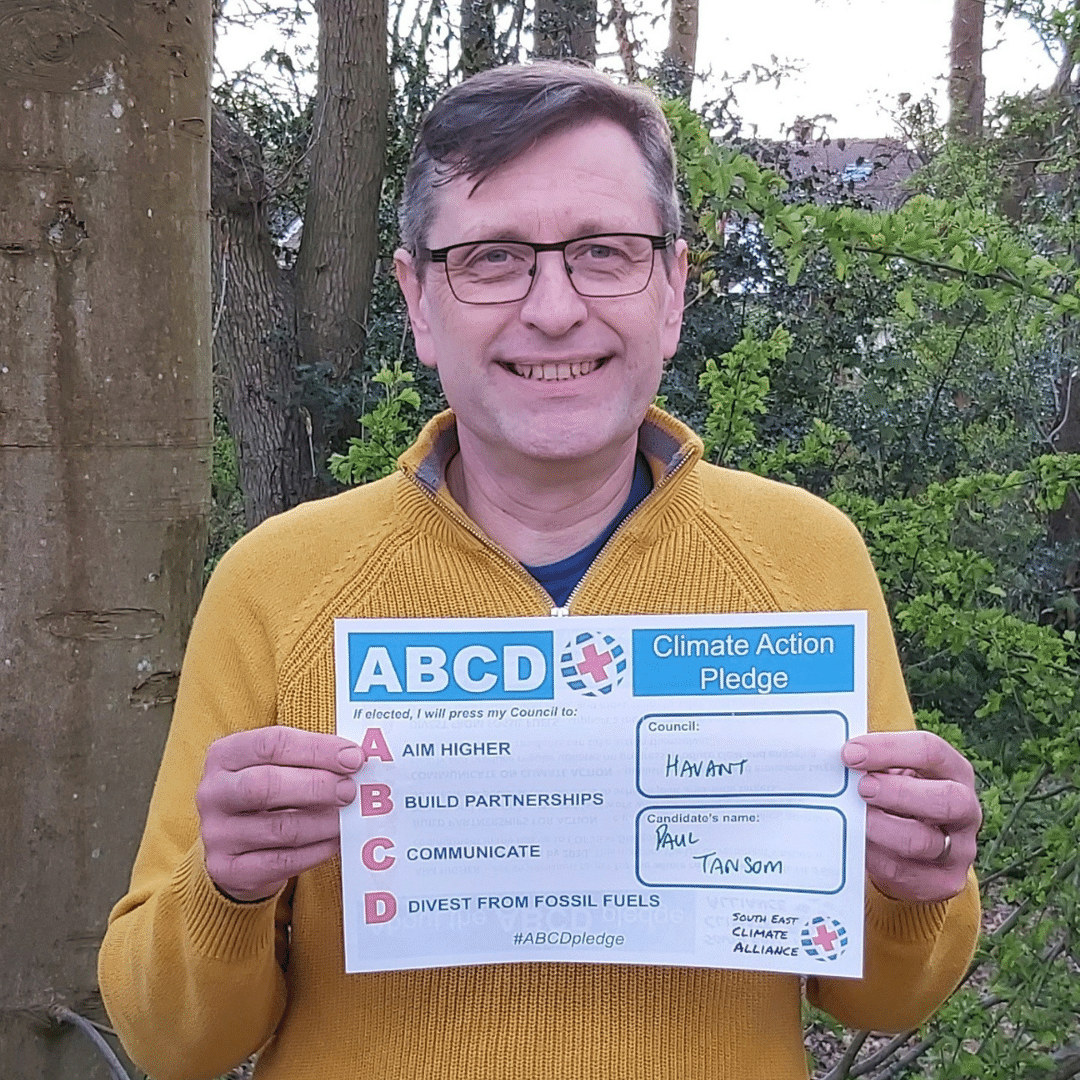 Another Lib Dem candidate signing the ABCD pledge, this time in Purbrook (Havant BC) and Purbrook and Stakes South (Hampshire CC). I'm involved with running Repair Cafe Havant and the Dr Bike sessions and a member of Havant Climate Alliance.

As an active user of Langstone Harbour, I've been involved with trying to get the discharge issue sorted for some years through my involvement with Langstone Harbour Board amongst other interested organisations.

I'm a Governor at two of my local schools - not strictly environmentally related, but we have to grow the next generation, and the primary in particular has some great initiatives with their grounds, growing food and outdoor activities. I'm also a BDMLR Marine Mammal Medic.

Find out more about Paul here. 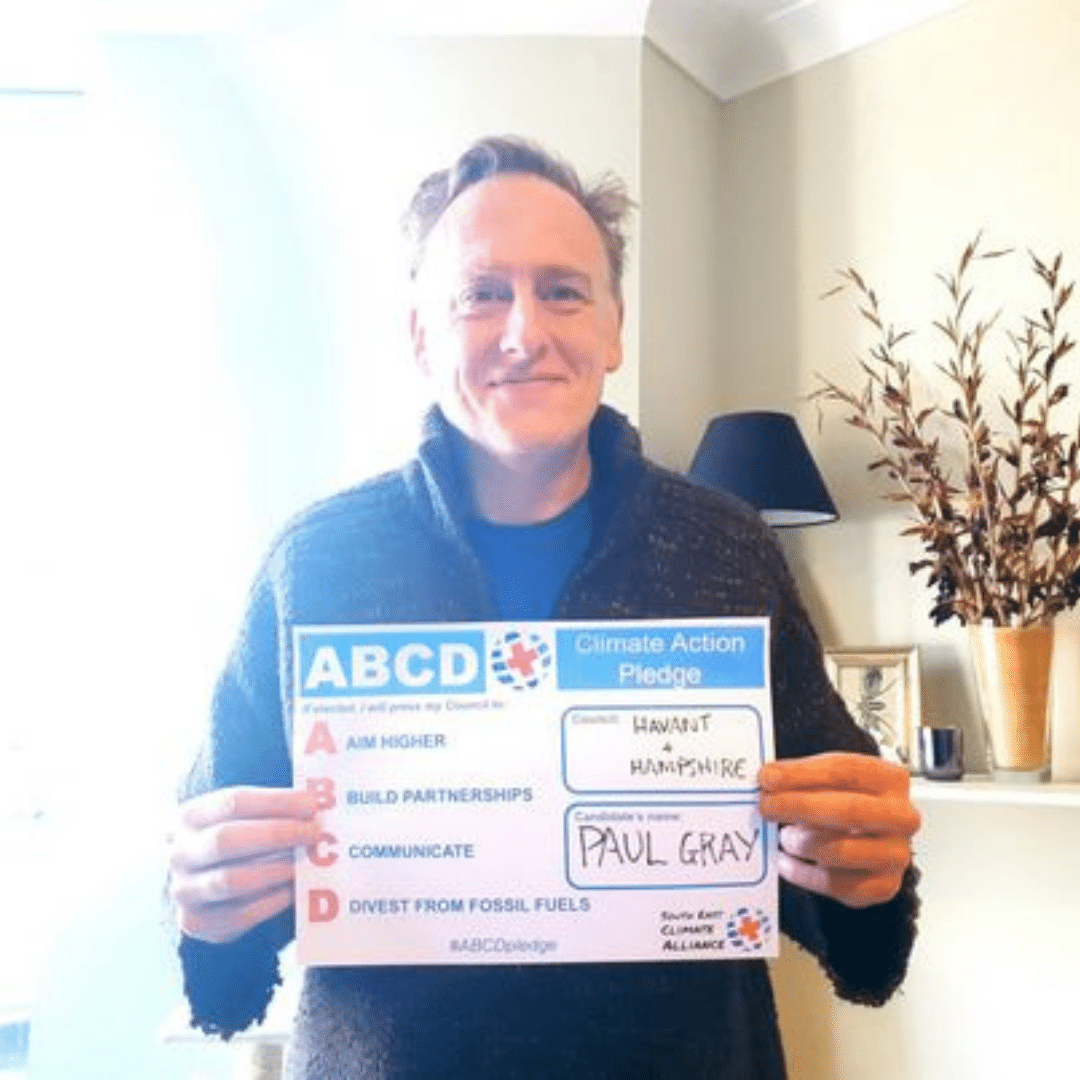 As an Islander, I'm particularly concerned about our water quality and the apparent desire to put profit before people. With a deregulatory government in place and no European backstop to prevent them from racing to the bottom, they will only further damage our environment, when as a global community we need to be doing the exact opposite.

Find out more about Paul here. 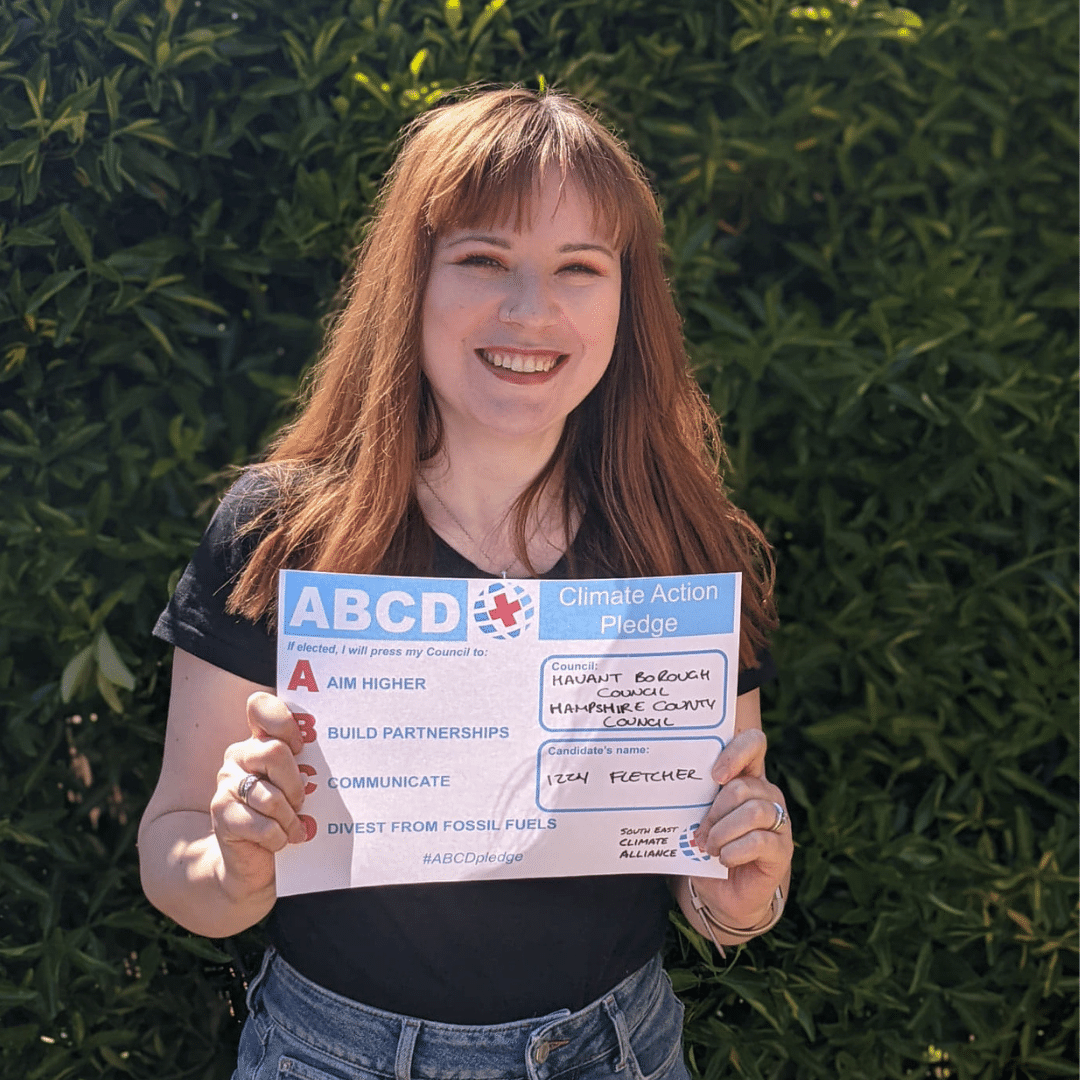 As a Millennial, tackling climate change is important to me not just for my generation's future but for the younger and future generations as well. I'm passionate about improving our local recycling facilities to the same standards as Winchester, Eastleigh and Portsmouth Councils.

The pandemic has also shown how important our green spaces are and why we need to look after them and ensure they are looked after for all to enjoy. Sadly too often they are littered with rubbish which needs to change. Too often we see that this rubbish won't have disintegrated within 30-40 years which we cannot afford to keep doing if we still want a planet that is still a nice place to live.

Doing all we can locally is a start to ensuring we keep our planet healthy for all to enjoy!

Find out more about Izzy here.